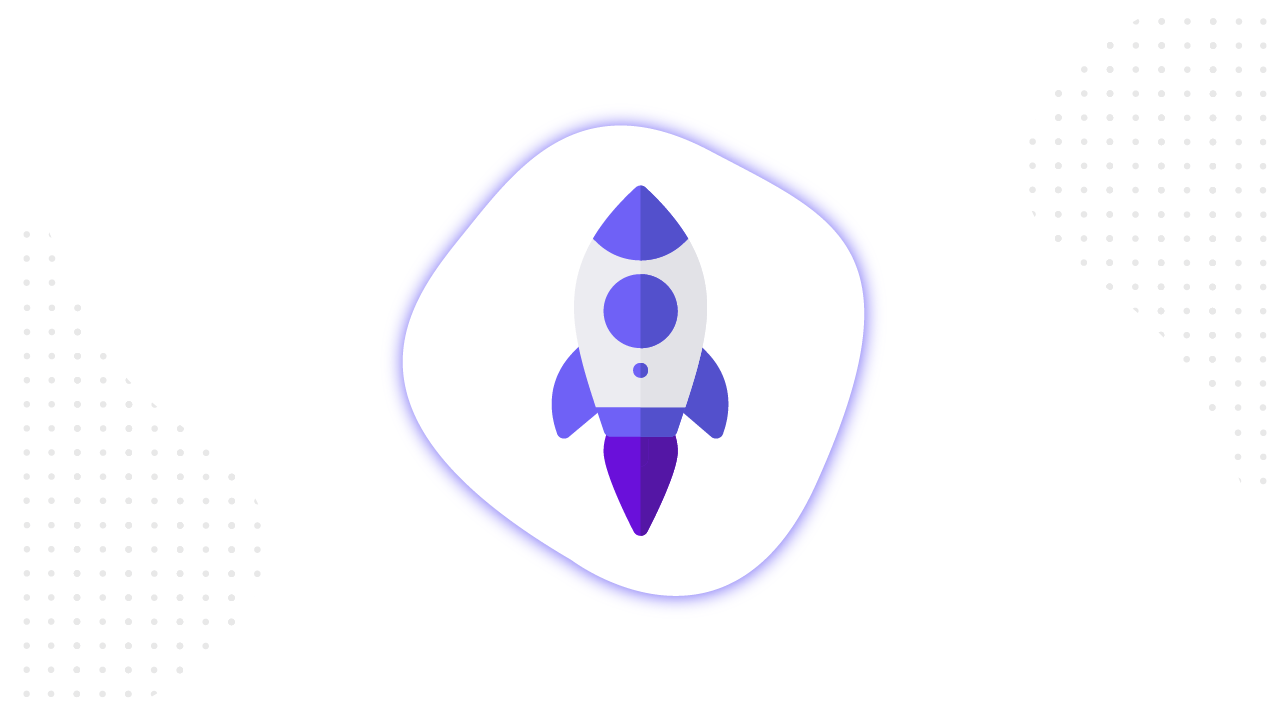 Content is king. You’ve no doubt heard about this oodles of times. Content is the foundation of virtually everything and it plays a crucial role in the promotion of your project.The message you craft will be able to attract and make the traffic to the site cheaper, resulting in the most effective advertising.

We have proved this working with the project All Women’s Talk. The case was realized 2 years ago but it still keeps its relevance. Moreover we have proved it with the second case — Liroom.

All Women’s Talk is the lifestyle online blog. Millions of women visit it every month to read about love, fashion, beauty, style, and health. There are more than 50 thousand articles on the site and the new content is added every day with the help of users. Moreover, you can sign up and become not only the reader but the author of such popular topics as

+ 22 Best Exercises For A Perfect Bottom

Readers can interact with publications using comments and likes.

It is no secret that the world is divided into tiers. There is no absolute standard, you may encounter from 3 to 5 tiers. In our project, we took as a basis 3 tiers in accordance with the conditions of the monetization of the portal. 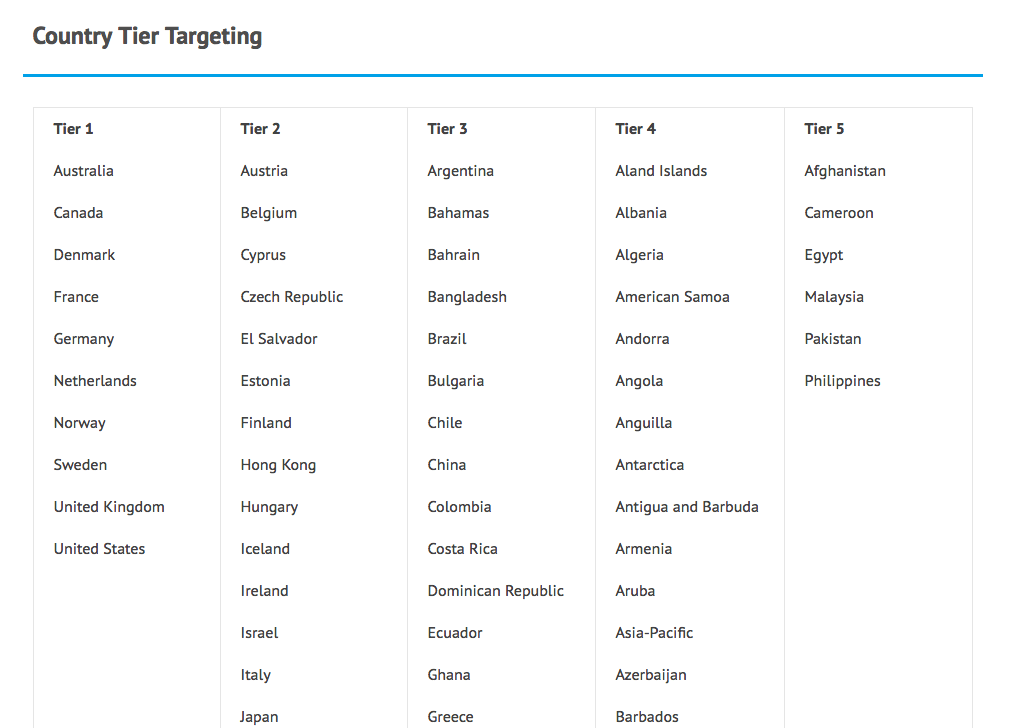 Our KPI is to get clicks on such prices:

In one case, the site is monetized because of advertisement banners placed there. That’s why achieving the goal and having marginal benefits from the cold audience or retargeting wasn’t really all that important to us. It was important to follow the principles of arbitration, the price of the moving users on the site should be cheaper than the payment for advertisement banner on the site. In this way, it was possible to earn money right away.

That’s why we had 2 main objectives:

The decisions that have been made and its implementation

For the work with All Women’s Talk the next 2 decisions have been made:

Establishment of the system of the best content selection.

For advertising purpose, the traffic was chosen. We’ve tested manual and automatic rates. However, it turned out that communication defines everything. That’s why the very first decision was to establish the system of selection of the best articles. After it’s publication on the site according to the internal communication the most popular articles were being chosen and published on the business page. The publication was placed for several days and then using statistical data we analyzed followers’ activity. Further, we compared these data with site’s data and the content selection has been done in this way.

The structure of advertising campaigns and targeting

At first, we created the pool of saved audiences for targeting. It included lookalike audiences (by authors, readers of articles etc), geotargeting, subscribers of the business page, visitors, which were also segmented and detailed targeting which was based on the interests. Afterwards, we took selected articles and promoted it to the relevant audience.

More information about different audiences in the article

Tiers were raised at the level of advertising campaigns. There were 5 campaigns: Tier 1, Tier 2, Tier 3.1, Tier 3.2, Tier 3.3. Publications were launched with the same targeting settings but on different countries.

Next, we were moving to expansion: publications which conform to KPI were being scaled. Experience has shown, it is not necessarily to raise prices strictly on 20%. Every publication has a different capacity. It was clear how much money needed to add — dozens, hundreds or thousands of dollars depending on the subject matter. For instance, the budget for the publication on some intimate topic could be increased to $1000. But when it comes to the publication on the more specific narrowly focused topic, the situation could change in completely another way while increasing on $10.

For the publishing of a new post it was enough to duplicate settings in the middle of the campaign and promote it.

Testing was short-termed (24-72 hours). Publications of new posts were daily. Promotion of the post which performance was 2 times higher than KPI stopped in 24-48 hours. Furthermore, we always watched the breakdown for timely switch off to increase the percentage of the target audience. Successful posts went to the scaling phase.

Publications which performance was within KPI had stayed until 3 days passed for stabilization of performance to start the scaling process. If the performance becomes stable we raised the budget. It made us aware that the topic was interesting for audience. If performance can’t be stabilized, the possibility of promotion scaling is very low.

It’s impossible to predict which post will be attractive even though despite All Women’s Talk has purely women’s audience. That’s why the following decision has been made — we promote every new post at all target groups and leave those which are suitable for us according to KPI in short-term periods.

What we did extra

In addition, we also posted a video in advertising to encourage warm audience and promote a brand.

If the purpose had been the promotion of video we would have achieved maximum effectiveness. But our goal was to engage profitable traffic and conversions (registration on site, adding an article, likes, comments) as much as possible. The purpose of posting video was ultimately branding.

The purpose of advertising ‘engagement’

At the beginning, as we said, the campaign objective “traffic” was tested for getting moving to the site despite we took particular identifier of the published article with OpenGraph markings and put it into ads.

It turned out that about 90% are clicks. After testing the advertising purpose ‘engagement’ we’ve found it the most profitable in comparison with the campaign objective ‘traffic’. The reason is obvious — CPM of ‘engagement’ is lower

On the following screenshot, you can see the breakdown by clicks:

Decisions applied to this case can be used by any content asset or the company which has a blog and want to get the cheapest value for moving to the site through an article on the blog. Depending on the business area, the value not always will be like that. It’s necessary to test our system to understand the order of numbers.

Liroom. Application of the working model on the other project

After the case, All Women’s Talk, we applied the same decisions for promotion of the content site Liroom, the blog about new Ukrainian music. The results were higher because the topic area was more narrow than in the first case. 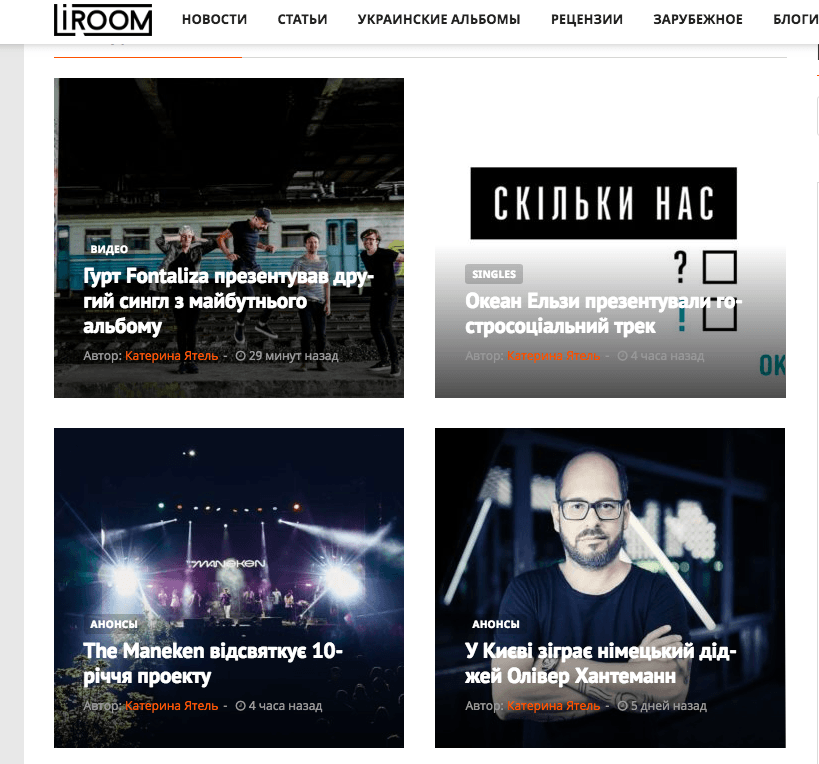 Our task was to engage a new audience. We divided it on 3 target groups:

The value of visits to the website should be the most profitable, which is why the KPI was 2 cents with a limit in 3 cents. Selling of tickets was an additional purpose. Location — Ukraine.

Having the experience of working with an All Women’s Talk, we’ve begun to run ads with the purpose of ‘engagement.’ As a result, we’ve got 9 from 10 clicks. We’ve got the same benefit as in All Women’s Talk’s case and formed it into a working flexible model.

Campaigns were divided into target groups according to the chosen audition. For content selections we were calculating the Engagement Rate, doing selection and recording in Google tables. Also, we monitored how many other actions had been done by users: the growth of followers, buying of tickets, the number of reading articles, the depth of scrolling and time spent on site.

The half of the publications for a promotion we have chosen were based on the empirical experience, the other half — according to the statistical data.

We also tried to time the launch of the promotion of one publication and set its own record. And we did it — 2 seconds. Don’t believe it’s possible, do you? This time is enough to copy the identifier of publication, to duplicate the ad group, to put identifier into an ad and launch the publication.

So you should take into account if you talk about a specific topic which is read by a particular audience. In this case, the result can be different in the cases mentioned above. Anyway, even if you have a small budget for promotions, decisions will still work, thanks to this flexible system.

If you need to promote brand posts exclusively aimed at specific audiences, don’t expect it to be cheap. As with Liroom, we promoted such type of publication and the value was higher than the KPI by several times. This type of content is aimed at another purpose, that’s why it’s efficiency should be estimated on other criteria: the raising of loyalty for a brand of certain groups of people, creating of an image, reputational effect, etc.

The content you are going to bring to audiences is a crucial feature. The settings of advertising campaigns doesn’t define the value of the results, only correct choices of content for promotion provides an opportunity to draw lucrative values. In our cases, success mostly depended on the communication aspect.

In the case with Allwomenstalk, we found and practised our model on small and big budgets scaling it during day. In fact everything is obvious. If it works, you will get approximately the same result with a small and big budget with a bit correlating pressure on auctions. In the case with Liroom, we repeated this decision and the result also was successful. Even if you work with a budget of 5 dollars per day, it doesn’t matter. The approach works flexibly despite the topic of the site and its target audience.

If you have a content site, or you need to promote your blog, send it to us — we will implement this system for you. 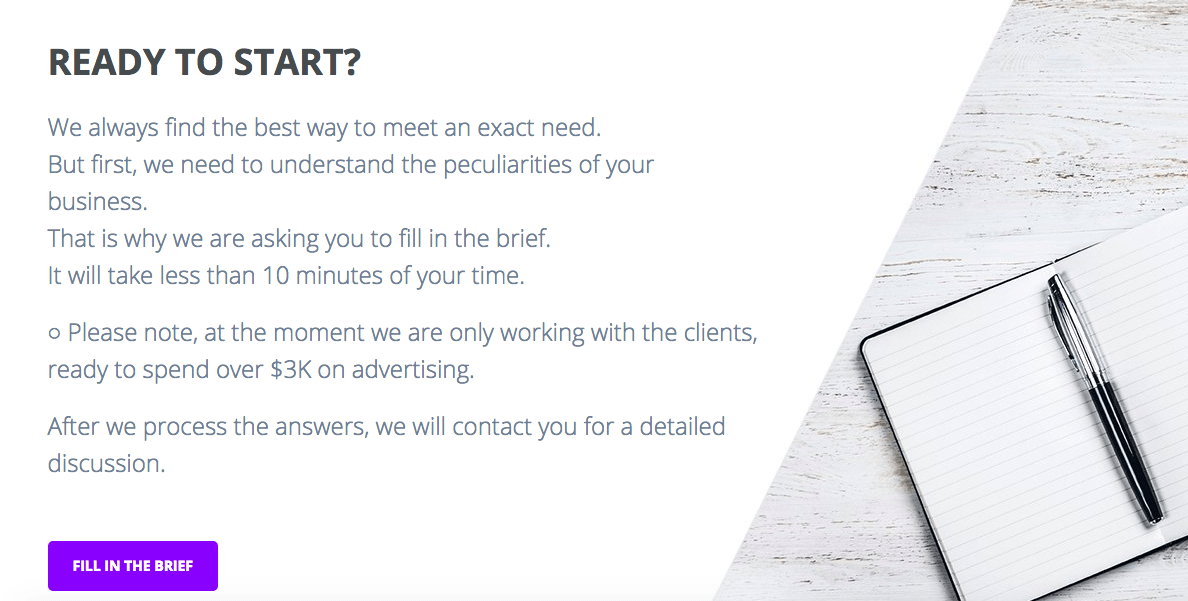